Posted by Ehijoshua (Jboss) on February 19, 2019
In this article, we explore a list of best free Android games without WIFI. These games can be played offline. They do let require an internet connection. All games featured in this article can be downloaded from the Google PlayStore. Games featured on this list are as follows: Shadow fight is an action-packed game, that features serious fighting. This game features dozens of characters. They are lifelike-animated characters skilled in Martial Arts technique of fighting. Characters also use weapons in fighting. You are allowed to equip your character with a weapon of rear armor sets. Playing the shadow fight 2, you crush enemies, humiliate demon bosses, with the sole aim of being the one close to the gate of shadows.  The Shadow fight 2 is available on the Google Play Store for downloads.

Real Football, is an Android game designed for football lovers who fancy playing simulated games on their Android devices. Playing Real football, you build your virtual dream team and lead them to become champions of the virtual world. You can also recruit star players, improve abilities, challenge yourself in the world Arena and do lots more. Real Football features 3D stadiums, polished shadows, detailed textures and spectators, multiple camera views during cutscenes. All these features put together, provides a realistic experience. Born out of  Asphalt racing games, Asphalt 8 Airborne, is a mobile racing game, designed for car enthusiasts who love to spend their spare time playing racing games in a simulated environment. Major Mayhem is an adventure game, that features a soldier character, who rescues helpful hostages from captivity. General Major Mayhem has got an itchy trigger finger, some scratchy stubble, and a fondness for shooting enemies in the face. Angry Birds is a popular Android game, that centers on a story where birds attack pigs, who stole their eggs. You are required to send birds using sling shorts. These birds are sent in a projectile motion as weapons to destroy the enemy camp and free the captive birds as well as their eggs. The Angry birds’ star wars edition is themed to the original star war games, you will find design cues from the star wars movie here. 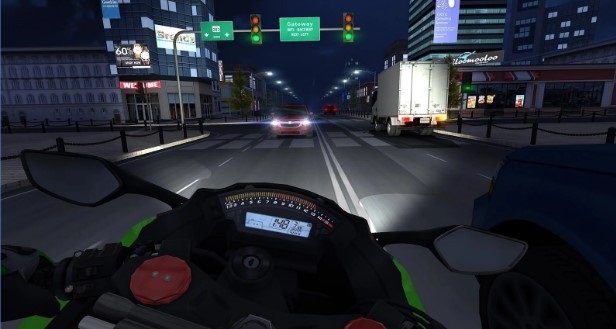 Traffic Rider is another awesome racing game that you can play offline. Traffic Rider is a racing game that features only moto-bikes. Playing the game, you are giving a virtual moto bike to race in a virtual racing track. Traffic Rider features career racing mode, a first-person perspective view, realistic graphics, and realistic bike sounds. Playing the traffic rider game, you explore endless highway roads, overtaking the traffic, upgrade and buy new bikes and do lots more. European war 4, is a game centered on the history of the 18th century way, championed by Napoleon. It features archaic modes of fighting, using swords and old fashioned guns. Playing the game, you have options to select different characters. Earn to die 2, is a car racing game, that features a lot of obstacles. Playing in the game, you are required to drive a virtual car through a lot of barriers, as the game is plotted in an environment which has been ravaged by zombies, resulting in an apocalypse. The main aim is to drive, avoiding obstacles, to try to reach the other side of the country, where the evacuation boat is located.

Cooking fever is a game designed for enthusiasts to sharpen their cooking skills in a virtual environment, cooking virtual foods with virtual tools. This game features 20 unique locations, lets you practice cooking with foods ranging from Desserts to seafood and Oriental dishes. Playing the cook fever game, you are provided with over a hundred ingredients to cook several dishes. Just like every other game featured in this article, this game is available on the Google PlayStore for download.
There you have it – A comprehensive list of best free Android games without WIFI. If you have other suggestions, feel free to lets us know in the comment section below.
Offline Games 2019