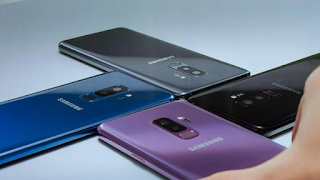 "The way we use our smartphones has changed as communication and self-expression has evolved," said DJ Koh, president and Head of IT & Mobile Communications Division, Samsung Electronics. "With the Galaxy S9 and S9+, we have reimagined the smartphone camera. Not only do the Galaxy S9 and S9+ enable consumers to shoot great photos and videos anywhere, it's a smartphone that's designed to help them connect to others and express themselves in a way that's unique and personal to them."

But do they impress? Were they worth the wait? Does Samsung have an iPhone X killer on its hands? Let's take a look at the two phones and find out.

Samsung Galaxy S9 Release Date – What You Need To Know

First up: let's take a look at the design of the phones and see how they differ.

The overall look and feel of the handsets is very similar to last year's Galaxy S8 models. They're incremental in this respect. And that's OK, providing you dug the Galaxy S8's design language (like I do).

Neither are revolutions in this regard; they're more of an evolution, with an emphasis on performance and user-features. This is the Apple way of doing things and, from a financial perspective, it makes sense as it lowers the R&D budgets which means better margins.

Changing the design, dramatically, every year costs money. You have to pay for design, testing, prototyping – lots of stuff, basically. Switching to a two-year hardware cycle negates this somewhat, so it's easy to understand why phone makers do it.

As expected, there aren't too many surprises when it comes to specs for both handsets. They'll run on Qualcomm's Snapdragon 845 platform, feature a 3500mAh battery in the S9+ and a 3000mAh in the S9, water and dust proofing, as well as heavily updated cameras (more on that in a bit), and wireless charging.

The Samsung Galaxy S9+ will feature more RAM (6GB vs 4GB), and both handsets will keep the same display sizes and resolutions as last year's models – so, QHD panels just with support for HDR10 and Dolby Atmos through the front-facing speakers. And there is support for microSD too.

There is a basic parity between the cameras used on the Galaxy S9 and Galaxy S9+, which is the good news. The bad news is that the Galaxy S9+ has secondary telephoto camera that'll achieve two-times zoom with zero image-quality loss.

It also adds in more finesse when it comes to portrait shots, as the bokeh effect (background blurring) is more prominent with this secondary lens in play. Beyond this, the nuts and bolts of the camera setups on both phones are very similar. You have a 12MP sensor with a mechanical aperture that'll move between f/2.4 and f/1.5 depending on your setting and lighting conditions.

This "switching aperture" will, in theory, improve the quality of shots taken in a variety of environments. It isn't the first time something like this has appeared in a phone, but it is the first instance that I am aware of where it switches automatically. How it works in practice remains to be seen. But I am very intrigued by the possibilities.

On the front of both, you have 8MP cameras, which will provide decent image quality for selfies and video-calling. Samsung has also added in AR emoji, if that's something you're interested in. I can't say that I am… but there ya go!

Tough to say. Samsung has kept the handsets very similar – and this is a good thing. The main differences (camera, battery size and RAM) aren't too big a deal breaker for potential users. I mean, if you got the S9 over the S9+, I don't think you'd be missing out on too much.

Obviously, though, if you want the best possible camera performance and abilities you'd go with the Galaxy S9+. If you're just after a solid phone with great performance, as well as good imaging, either phone would do, to be honest.

Which Would I Buy?

Simple: the Galaxy S9+. Why? I like the best of the best, especially with respect to battery life and imaging. The Galaxy S9+ has a slight edge in this regard and that, combined with the everything else, would make me go with that phone.

Still, I would 100% recommend the S9 as well, especially if you're rocking a Galaxy S7 or any phone that is a couple of years old. If I were using a Galaxy S8… well, I'd probably wait until the Note 9 launch later this year, as the S8 is still a fairly solid phone, even with these new ones around.