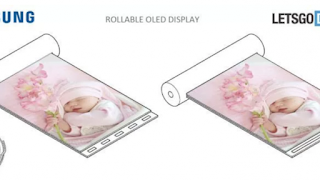 The tablet space is more or less dominated by Apple. Most other players have thrown in the towel, admitting defeat, but ALL this could change in 2018 with the rise of completely new form factors. And Samsung could well be leading the charge with its truly flexible tablet designs.

We've known about Samsung's plans for folding devices for years. The Galaxy X has been rumoured since around 2014. But newly leaked images from a Samsung patent show a rather innovative-looking design for a fold-up tablet device.

A Scroll-Style Tablet… The Samsung Scroll

Filed in Mid-June, the tablet device, if you could call it that, features a metallic unit that houses a slide out, completely flexible display. The design looks a lot like a scroll, so we could well see the nomenclature reflect this when the device eventually surfaces.

As you can see in the images, the cylinder that houses the display is also home to a fingerprint scanner on the bottom, as well as all the other components that make the tablet (sorry, scroll) function.

The display itself is called a "rollable OLED display" and the device itself could either run Android or Windows 10 – or whatever, really. And while it might look too futuristic for right now, you have to remember that Samsung's R&D division has been working on tech like this for years.

LG and Phillips are both researching similar display technology too, so this type of display is not science fiction and you can almost certainly expect to be using them before 2020.

Being first to market with such a device will no doubt be high on Samsung's agenda. Why? Simple: if you're the first with a new style of design, like a tablet, consumers tend to associate your brand with that style of device. This is what Apple has successfully done with its iPad and, before that, the iPod (though it definitely didn't invent the MP3 player).

I cannot wait for this type of form factor to arrive. Mostly because it has been promised for as long as I can remember, but also because the applications for it are immense. And not just in terms of portability!