Showing posts from July, 2017
Show All

Free Ads Posting - The New Way of Marketing IN Africa

Free Ads Posting - The New Way of Marketing THE  trend of advertisement and marketing has undergone a massive change with the inception of online advertisement posting. With the world stepping ahead with the multiplicity of websites and portals, there is an immense opportunity for the marketers to go for digital marketing. The Nigeria has not lagged behind, and there are several websites that provide you with customised assistance in Free Ad Posting Nigeria. Advantages of Online Ad Posting 1. Free of Cost: When it comes to free ad posting, there are several advantages that you can reap from the Free  Nigeria   Classified Sites . There are several companies which look for manpower online, and there are free websites that connect the companies to their required talents. This helps in both the ways, as the people who are looking out for jobs find the Free  Nigeria   Classified Sites  pocket-friendly and compatible in the economic sense of the term. The companies
Post a Comment
grid

3 Charging Mistakes That Are Killing Your Laptop & Mobile Battery

3 Charging Mistakes That Are Killing Your Laptop & Mobile Battery Almost all of the gadgets and devices right from your phone, laptop to shavers and watches are powered by Lithium-ion batteries. However, many of us aren't aware of how to take good care of the batteries, especially in today's scenario where longevity of battery decides the lifespan of the device. So, here is something you must read that will guide you about how to take better care of the batteries in your device and to extend the lifespan of the device: Why Lithium-ion battery? A lithium-ion battery uses lithium ions as a key component of its electrochemistry. These batteries are built using advanced technology and all your devices ranging from smartphones to Tesla on road, all are powered by Lithium-ion technology. There are huge benefits of Lithium-ion battery over other technologies as they charge faster and have a better longevity. How Lithium-ion battery works? Every battery consist of a positive elec
Post a Comment
grid

Sell Second Hand Cars Online If you are planning to sell used cars online then it is definitely a prudent decision. If you can access the right site for the auction then you will never regret the same. Are you planning to sell your used car? Are you in a dilemma where to post an advertisement regarding the features and the offer to purchase your second-hand car? Are you anticipating the finest deal available in the market? If the answer to all these questions is YES then you are at the right place. The reason is simple! Here you will get informed about fetching the right deal with the second-hand cars for sale. If you are planning to give an advertisement in the local newspaper then it is advisable not to go for the same. It is basically because it cannot fetch you the same advantage that you can attain out of the used cars for sale online. Yes, if your preference is to get the foremost deal in the used cars then looking for an authorised market over the Internet is a far better opti
Post a Comment
grid

Oukitel Smartphones You Can Get in Nigeria Right Now 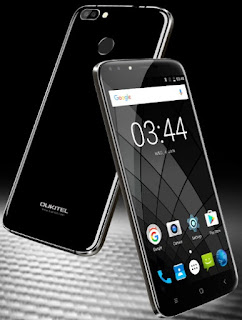 Oukitel is a China-based mobile device manufacturer. The company received mobile phone license in 2008 in China and built its R&D centers in Shanghai and Shenzhen soon after. Oukitel sells devices in limited markets. The company is well known for consistently pushing very strong and affordable smartphones for the low-end market with big battery life into the Android market. One of the key features while buying a new smartphone is its battery capacity. So, if you too looking for a 'big battery' smartphone, one that can last you an entire day with all that regular chatting, video chatting, video watching and social media updates then Oukitel Smartphone is highly recommended for you. Some manufacturer still celebrating 4,000, 5,000, 6,000mAh batteries, Oukitel is taking that to a whole new level. The Oukitel K10000 Pro - which is also available on  jumia Global – is currently the smartphone with the biggest battery unit, sporting a large 10,000mAh of battery capacity. It suppo
Post a Comment
grid

Zoto Exclusive Referral is Back Again, Invite Friends & Earn Up To N20,000 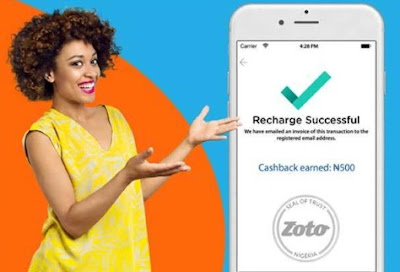 It's time to get friendly and Zoto makes it worth your while. The Zoto referrals is back. Same as before, you can make as much as N20,000 by inviting your friends to try Zoto. Hope you remember Zoto? A secure and Fastest way to recharge anywhere in Nigeria with lots of benefits. Zoto Mobile recharge was introduced to you guys on this blog some months back and I'm pretty sure that lots of people benefit from their offers.  I'm glad to inform you that Zoto is back again with their amazing offer. The promo they did last month was just N200 bonus per referral, but this time around, it is N500 airtime bonus per referral! Earn N500 by referring a friend. When someone uses your referral code or link to sign up on Zoto, you both get N500 on their first recharge. Zoto, a mobile money and mobile recharge app, has become Nigeria's most popular app in the shopping category of Google Play Store. The mobile app is rated above Jiji – one of the leading classifieds websites in Nigeri
Post a Comment
grid

5 things you should know about the tech industry

There is a lot more to the tech industry than we realize. There are many opportunities to explore in the industry and many misconceptions to dispel; there are also some dynamics to understand, the knowledge of which can help you make smart investments in the tech industry. Here are five things you should know about the tech industry. 1) The Industry is Not all About Coding The tech industry consists of a lot more than coding. There are lots of jobs and technical skills available in the tech industry aside coding and programming, some of which include: design, data analysis, setting up systems and processes, project management, technical writing, web hosting and so on. 2) Proficiency in Coding Does Not Depend on How Good You are at Math or Science Coding is about problem solving and logic, and you will find that some of the best coders admit to not being good at or even liking math or science. In fact, coding is easier learned by those coming from backgrounds or professions where proble
Post a Comment
grid

A US court has sentenced  Mark Vartanyan  for developing the notorious Citadel malware. Vartanyan who helped develop the notorious malware called "Citadel" designed to steal personal financial information, was sentenced to five years in prison on Wednesday. Also known as "Kolypto", Vartanyan pleaded guilty in March to one count of computer fraud after he reached a deal with federal prosecutors and he is the second individual charged in connection to the sophisticated Citadel malware. The 29-year-old man was arrested in Norway in October 2014 and was extradited to the US in December 2016. US District Court Judge said Vartanyan would receive two years of credit for time served in Norway prior to his extradition. While living in Ukraine and Norway from 2012 to 2014, Vartanyan allegedly helped in the development, improvement, maintenance and distribution of Citadel, a malware toolkit designed to infect computer systems and steal financial account details, personal data
Post a Comment
grid

As authorities in China tighten their grip on the internet ahead of a major leadership reshuffle in Beijing, popular messaging service WhatsApp has partially been blocked. Photo, video and voice messages sent by the Guardian from Beijing were all blocked on Wednesday, but text messages were not affected. Dozens of users in China complain of a total ban on sending any type of messages on WhatsApp. The ban comes as Chinese officials are preparing for a twice-a-decade leadership shuffle later this year, with various factions within the Communist party jockeying for control of key positions and president Xi Jinping likely to further consolidate power. However, the company declined to comment on the latest partial ban by Chinese authorities. China operates the world's largest censorship system, known as the Great Firewall, blocking thousands of websites including popular platforms such as Facebook, Google, Instagram, YouTube and a host of foreign news outlets.
Post a Comment
grid

The new 25 per cent hike in cost of acquiring data sevices has raised fresh concern over ability of the Nigerian Communications Commission (NCC) to regulate both data and voice sevices in a competative telecommunications sector. Subscribers of various related services in the industry have complained of the frequency in sudden rise in price, especially the broadband (data) sub-sector, with the latest in the middle of July 2017. Most service prividers had quietly increased their prices, leading to 30 GigerBite (GB) going from N20,000 to N25,000, The banking sector is the most affected by both poor data quality serivices and hikes, as many have also lamented that as bulk consumers, relying on data for online banking services, they suffer double tragedy in the hands of service providers. The proprietor of an Ikeja-based internet serivces outfit, Sendata Cafe, Mr. Gilbert Asoanya, and the Chairman, Lagos branch of the Association of Telecoms Services Consumers of Nigeria(ATSON) said the fre
Post a Comment
grid

By Ehijoshua (Jboss) - July 23, 2017
Dispute over N1.3m bill: Hospital seizes corpse of housewife for eight months Anambra State Police Command and the Nigeria Medical Association, NMA, are trying to unravel the circumstances surrounding the refusal of the director of an in Ozubulu to release the body of a patient, Mrs. Evan Anajemba, who died in the hospital in November 2016 eight months ago), for burial. The director, who had allegedly received N252,000 from the husband of the deceased, Mr. Godwin Anajemba, while the woman was on admission in the hospital, allegedly demanded additional N1.368 million after the woman gave up the ghost. Anajemba told Sunday Vanguard that when all efforts to persuade the director to release the body of his wife to him failed, he consulted a lawyer and also reported the matter to the Anambra State Police Command, which has been mediating. He also reached out to the Nigeria Medical Association, NMA, pleading with it to prevail on the doctor to release the body of his wife. A lawyer, Dr. E.E.
Post a Comment
grid

Best Fitness Apps for Android – Using Technology to Track, Monitor and Motivate Yourself to Get Fit

T echnology is changing many things in our lives and our health and fitness is no exception. There are hundreds of apps out there that help us track, monitor and even motivate us to be fit and healthy. It can be daunting when faced with all the choices. This article looks at some of the most popular Android apps, covering different aspects of health and fitness. Some apps will focus on monitoring physical activity, whether you run, walk, swim, cycle or play sports. Some will focus on food and nutrition, helping you count calories and monitor the nutritional value of the food you consume. Some provide ideas and inspiration for workouts. And some apps act as a hub for all your data, so you can see and access all your data in one place in a visual user-friendly way. But it's not just about the apps – there is also a variety of devices and gadgets that combine with these apps to create an entire eco-system of monitoring health and fitness. These devices include activity trackers, smart
3 comments
grid
More posts