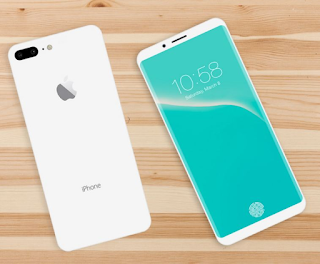 When will Apple launch the iPhone 8? Read the latest rumours about the 2017 iPhone specs, price and UK launch date, celebrating 10 years of the iPhone.

This year marks the 10th anniversary of the iPhone, so if you're anticipating the usual annual upgrades to the iPhone you might have a big surprise in store. Too awesome to be called simply '7s' the upcoming iPhone 8 or iPhone Edition should be the 'revolutionary' iPhone we've all been waiting for. See also: Best phones 2017.

However, the iPhone isn't the only thing at Apple celebrating 10 years in 2017 - the company's partnership with AIDs charity (RED) is also hitting double digits. To celebrate, Apple has in March 2017 announced a brand-new red version of the iPhone 7 and 7 Plus, and if the colour proves to be a hit we could also see the hue added to Apple's line-up for the iPhone 8.

Here's a summary of what to expect from the iPhone 8:

5.8in edge-to-edge screen with no bezels and no physical home button

Long-range wireless charging - may not come until 2018

That's the main specs covered, but here are the other rumours:

Quick charging will be supported when using a cable

New speaker design could make the phone the thinnest ever

It will use an OLED screen from Samsung - read more.

When is the iPhone 8 release date?

Although still months away, we can fairly confidently predict when the next iPhone will arrive.

Assuming the annual announcement tradition continues, the iPhone 8 release date will be in September 2017. However, 2017 marks the 10th anniversary of the original iPhone launch, so we wouldn't be too surprised if Apple mixed things up a bit.

The latest rumour, though, says there are production delays because of supply issues with the 3D camera system. This could push back availability to November, or even later.

Although we're predominently calling it the iPhone 8 in this article, there are a number of possibilities when it comes to the name of this year's model.

The name may have been confirmed with an Apple employee referring to the new device by the name 'iPhone 8' unprompted when speaking to Business Insider. However, there is another suggestion as Apple Insider claims that Apple could call this year's iPhone the iPhone X.

According to Mac Otakara, the 2017 model may well be simply called the iPhone Edition alongside the iPhone 7s and iPhone 7s Plus making up three options.

Vote in our poll to let us know what you think Apple will name the anniversary iPhone.

How much will the iPhone 8 cost in the UK?

We're speculating for now, of course, as the iPhone 7 has only been sale for a while. Whether Apple will introduce a price increase for the potentially special iPhone 8 is anyone's guess.

However, the iPhone 7 price jumped up to £599 in the UK thanks to Brexit and we hope that it will stay the same with next year's anniversary model. However, in light of the latest leaks, the 'anniversary' model seems to be an ultra-premium device that could cost more than any iPhone yet. At least one report claims it will be more than $1,000 in the US.

Rival devices like the LG G6 and Samsung Galaxy S8 are, or are predicted to be, more expensive than predecessors.

If Apple does indeed do something special for the iPhone's 10th anniversary, which is ever more likely from all the leaks, the iPhone 8 will be one which fans will no doubt want to upgrade to on launch day. Could we see the biggest queues ever?

A combination of design and hardware changes will make the iPhone 8 the most radical new iPhone to date, if we are to go by the rumours and leaks.

Instead of listing every leak that's ever happened regarding the iPhone 8, we're going to let you know about the biggest and most important one and point out which things have been leaked multiple times, making them more likely to be true.

A key element that's been leaked over and over again is that Apple will switch to OLED technology for the 2017 iPhone - like the Samsung Galaxy S7 - rather than the traditional IPS tech Apple has used previously. This would primarily mean better contrast and colours.

Probably more interesting, and more obvious, is that the iPhone 8 will have a larger 5.8in display. It will be 'edge-to-edge' so Apple's comparatively chunky bezels might soon be history.

The touted resolution is 2800x1242 which is a lot higher than any previous iPhone. Apparently, a deal for Samsung to produces the screens has been reached.

It more unclear whether the screen will be curved at the sides in a similar way to the Galaxy S7 edge, with conflicting reports on the subject. The most likely outcome seems to be a subtle curve that doesn't add any extra functionality.

This concept image via ConceptsiPhone shows what an edge-to-edge OLED display iPhone might look like if it has literally no bezels.

A huge change needs to be made to the 2017 iPhone in order for the screen to get a lot bigger without the size of the handset increasing. While others put fingerprint scanners on the back or even the side, Apple has another solution.

If rumours are true, the iPhone 8 will have the Touch ID sensor embedded into the screen.It's possible there will be a 'function area' at the bottom of the screen where this is housed and acts slightly like the Touch Bar on the MacBook Pro.

KGI analyst Ming-Chi Kuo refutes other reports saying Apple will use USB-C instead of Lightning on the iPhone 8 in order to introduce fast charging. Via TechTimes, he says that Apple will make a few power-management tweaks to enable the battery to be charged faster when using a Lightning cable.

Jony Ive has wanted to introduce an iPhone which resembles a single sheet of glass for a long time and the 2017 anniversary iPhone could be the one. It's rumoured that at least one iPhone in 2017 will use a glass body, according to Apple supplier Catcher Technology. Glass on the front and back would make it like a hugely updated version of the iPhone 4S.

This, combined with the rumour that the iPhone 8 will sport an edge-to-edge OLED screen makes things rather interesting.

Allen Horng, chairman and chief executive of Catcher Technology, a key supplier said: "As far as I know, only one [iPhone] model will adopt glass casing next year."

However, don't get your hopes up. Although Foxconn - the manufacturer of iPhones in China - has been experimenting with building a glass chassis for around a year, it is likely too early to put it into mass production.

Current tooling is all for aluminium chassis and that's where the expertise and investment is. A switch to glass - or ceramic or some other material - would be such a massive change that there would be far more leaks backing up these rumours.

Put simply, we don't believe that the iPhone 8 will be an all-glass machine.

The latest video from ConceptsiPhone does a decent job of showing what the iPhone 8 might look like with a visual look at how the bottom of part the display might be used.

Will the iPhone 8 feature a 3D camera?

In regards to the Touch ID sensor, Macrumours says that a JP Morgan analyst claims there will be no fingerprint recognition at all, and that Apple will instead embed a front-facing 3D laser scanner that will be able to accurately recognise your face.

This will avoid the problem where Touch ID doesn't work if you have wet fingers - or the sensor has water on it. He says it will also be more secure, which could lead to more companies - including banks - supporting Apple Pay.

This theory is backed up by Kuo of KGI Securities whose latest report, via 9to5Mac, says Apple will put an enhanced front camera and an IR sensor in order to build up a 3D model of the user's face.

A patent filed by Apple shows that the firm is looking into depth maps for smart facial detection. It's based on infrared tracking and can detect how close or distant someone is. Whether or not it will be part of the iPhone 8 remains to be seen but it seems unlikely with the focus on the 3D camera mentioned above, but that's not to say this can't be a feature as well.

The report also says that Apple's 3D algorithms are "years ahead" of Android, and such a feature could be an iPhone exclusive for a couple of years before Android phone makers catch up.

What colours will the iPhone 8 come in?

If you're wondering what colours the iPhone 8 will come in then we might have an answer via Macotakara. The Japanese site claims the smartphone will come in an additional red colour which will join the existing Black, Jet Black, Silver, Gold and Rose Gold options.

We now know that a red version of the iPhone 7 and 7 Plus was announced in March 2017 to celebrate Apple's 10-year partnership with AIDs charity (RED). It is not known whether this colour will be a permanent feature in Apple's iPhone line-up, or whether the source had simply got the wrong iPhone model.