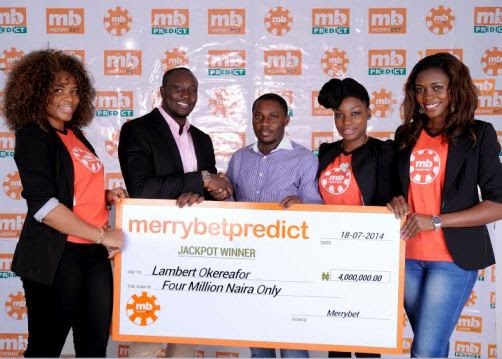 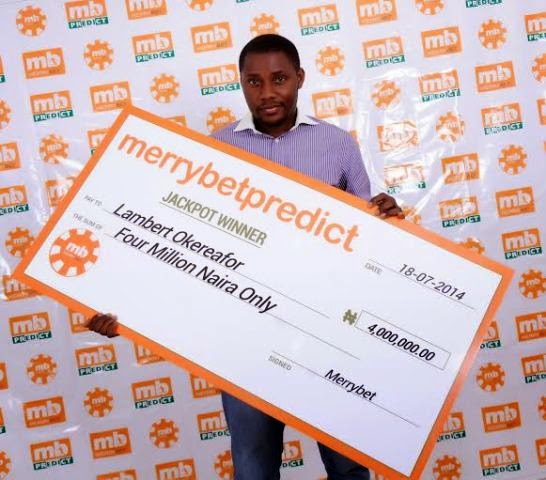 Presenting the winnerstheir cheques at a special event at Victoria Garden City, Lagos, the Chief Communications Officer of Merrybet, Mr. Lanre Odiase congratulated the winners.   He emphasized the commitment of the brand to rewardingplayers for participatingas over a N100,000,000 would be won in the Merrybet "Predict & Win" promo. 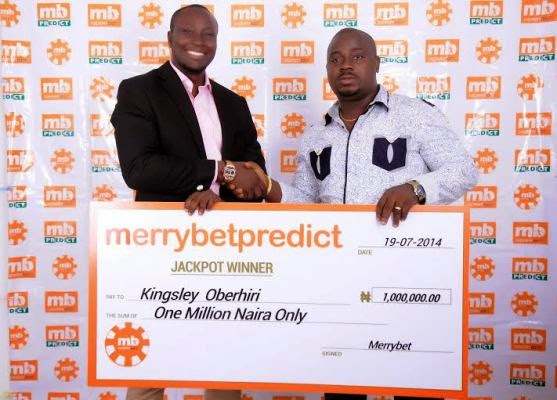 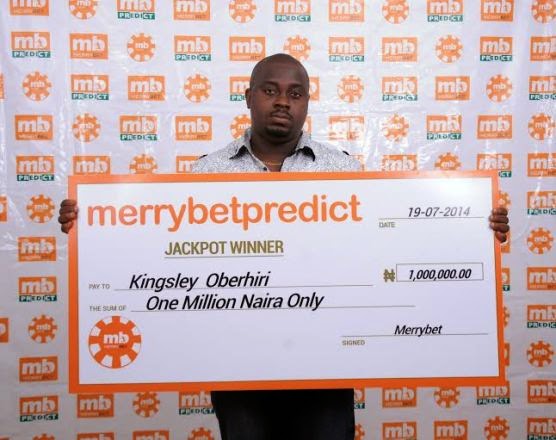 Explaining how the jackpot winners emerged, Mr. Odiase said every week, 10 football matches are uploaded on www.merrybetpredict.com and all players get one free weekly prediction but can pay N100 to get more predictions and increase their chances of winning.  All players had to do was predict if a match would end in a win, draw or loss for the home team for a minimum of 8 of the 10 matches correctly without having to get the exact score line for the matches to score a strike.  A player who scores a second strike wins the available jackpot. This was the Weekly Jackpot category, with N1,000,000 to be won weekly and in a week no one won, the jackpot was rolled over to the next week.

Other categories are the Weekly Highest Point category, which rewards players with the weekly highest for the week with sums of N100,000 for the 1st place, N50,000 for the 2nd place, N30,000 for the 3rd place and the next 100 players getting airtime of N1,000 each.

Most rewarding of all is the Leaderboard category, which kicks off during the English Premier League.  The sum of weekly points for all players are accumulated throughout the season and the player with the highest point gets an astounding N15,000,000, 2nd gets N12,000,000 and the 3rd gets N10,000,000.

Mr. Odiase further stated that with the "Predict & Win" promo being so easy to play, it was open to Nigerians from all walks of life and that ladies were not left out as several female winners had already emerged in the Weekly Highest Point category.  He encouraged Nigerians to take advantage of the promo as becoming a millionaire might just be one prediction away.
The winners were excited and grateful to the bookmaking giant, Merrybet.  They commended the commitment of the Merrybet brand to delivering ground breaking products and making it very rewarding for players.